For 17 years, it was Dan Barnes’ job to get travel club members free car rentals and other perks through collective buying.

In 2005, the founder of Bethlehem-based Membership Services Corp. decided to apply that same philosophy to prescription drugs after hearing there was a great need for affordable prescription coverage in the Lehigh Valley.

Barnes started soliciting pharmacies, asking owners if they would offer discounts on prescription drugs if he could increase their customer base by attracting the uninsured and underinsured. They agreed, and the FamilyWize prescription discount card was created.

The free card provides participants with an average of 40 percent off prescription drugs, with some discounts as high as 75 percent. 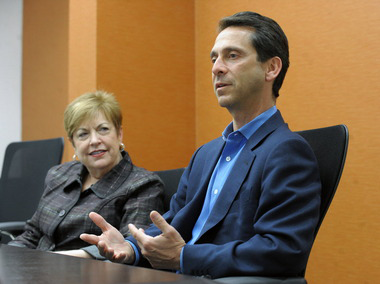 FamilyWize started as a Lehigh Valley company but through a partnership with United Way Worldwide, it has grown to a national organization. More than 6.5 million people — including about 39,000 in the Lehigh Valley — have used the card to get discounted prescription drugs in the company’s nine-year history.

FamilyWize continues to grow from a Membership Services Corp. side project into a good-sized business. The company, which employs about 30 people, just moved into a new office on Spillman Drive in Bethlehem because it had outgrown its Upper Saucon Township space. All employees get full prescription drug coverage — no FamilyWize card needed.

Some businesses are helping to cover the cost of the new federally mandated care by upping co-pays and deductibles, which is increasing the cost of prescription drugs, Barnes said.

“We’re seeing a huge acceleration of that just within the last 120 days,” he said. “I think that’s happening faster than we or anyone else anticipated.”

Not just for uninsured

The FamilyWize card isn’t just for the uninsured, Barnes said. One in two adults lack adequate prescription drug coverage, and that’s throughout all income levels, he said.

Susan Gilmore, FamilyWize’s executive director of community engagement, used the card herself while she was transitioning insurances after resigning as president of the United Way of the Greater Lehigh Valley to come to FamilyWize last year. Her son-in-law works for a large company but his health insurance has high deductibles and co-pays, so he uses the card regularly, Gilmore said.

“You can have a job and not have the type of medical coverage to sustain you or your family,” she said. “We tell everyone: Take the card with you to the drug store.”

FamilyWize’s greatest challenge is spreading the word about its free cards. The company first partnered with United Way of the Greater Lehigh Valley in 2005 and then expanded its connection to United Way Worldwide a few years later.

FamilyWize just renewed its partnership with United Way Worldwide last month for another 10 years. The renewed partnership provides assurance to the program at a time when there is a lot of uncertainty surrounding the Affordable Care Act, Barnes said.

“United Way is focusing on creating opportunity for all by improving health, education and financial stability,” Stacey Stewart, the United States president of United Way Worldwide, said in a statement. “Our Partnership with FamilyWize helps us advance that cause.”